The technology has become a tool, and I’m not sad

CallamMcMillan.com > IT > The technology has become a tool, and I’m not sad

I would like to say a big thank you to Facebook. The other day it thought it would be nice to remind me of a photo I took at university, something I still think of as being not that long ago, But no, Facebook had other ideas, and  depressingly reminded me that it was in fact five years ago. The photo is from my lab in my final year. I was working on a project around home automation, so I had lots of fancy electronics kit, a couple of computers and a whole bunch of time on my hands. It also meant I could say why not reinvent the wheel, perhaps I can make it better? Around the time this photo was taken, my modus operandi for anything technical was start with the biggest and best, then work backwards until it fits a budget. 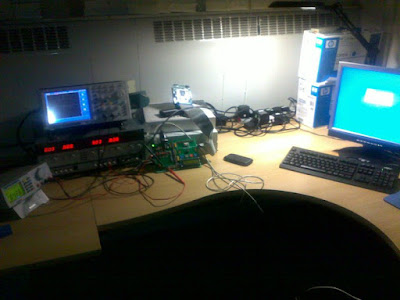 My lab at university

In the years that followed this photo, I’ve worked on a number of project. This has included refurbishing a shop, installing CCTV and a network in another shop, installing a network at his home, and moving over to Cisco routers. In the last year though something interesting has happened. Technology has stopped being fun, now it’s just a tool. A network and the computers on it are just a means to an end, which at its simplest is to make money. What happened? How did I go from loving to mess around with technology to thinking of it as a mere tool in a couple of years?

The more things change, the more they stay the same

Once upon a time, a new Intel processor was a big deal. As a kid I remember moving from a 66MHz 80486 to a 233MHz Pentium II, through a Pentium 3 and a Pentium 4M in a laptop. There were a couple of AMD chips and finally the Intel Core2 Duo and a Core2 Quad. Over any four year period, the performance increase was spectacular. Then we entered the “modern era” of Intel processors with the 2000 series, leading to the recently released 6000 series. Compare an i7 2600K which was the best mainstream desktop processor you could buy in 2011, and the i7 6700K which is the best you can buy today. The difference – measured in percentages rather than multiples.

This means that there is no point in building new computers. Where as once I would have specified a new computer with the best processor the budget would allow, now it’s about what gives the best performance per watt of power. It’s also why my personal machine has a Pentium K (G3258) which performs about the same as my old Core2 Quad for a fraction of the power. Just as a builder won’t replace a tool until it wears out or something comes along that’s demonstrably better, it also explains why the trade press is constantly bemoaning the fact businesses just aren’t buying new computers. Why turn around your hardware every three to five years when what the replacement will be no better?

Once is interesting, twice is easy, but three times is boring

If you haven’t built a desktop computer before, I really recommend that you try it. The first time you build a computer, you’ll enjoy the challenge – selecting and assembling the components to get a system that does exactly what you want. The next couple of times you build a system are easy, you know what components work, and you know how to get a system within budget. Assembly is quick and easy too. As the computer has moved from being a specialist item into a general tool the challenge of assembling one has been reduced to trivial levels. If I’m not concerned about quality, I could put a basic PC together in 20-30 minutes – everything is now plug and play.

What this means though, is once you’ve built a computer or five, the challenge has gone. It becomes a type B job and therefore boring. The fact that modern PCs are designed to be plug and play means that when it fails to function as expected, there’s often little you can do about it. A week ago I found myself having this very discussion. A friend was upgrading an Asus H81 motherboard from a Pentium G3220 to a G3258, but it wouldn’t start. The resolution was to switch the processor back and flash a new UEFI, something he couldn’t do from Windows 10 because Asus don’t really write software for Windows 10. So what he had to do at this point is install Windows 7 to a new SSD and then use this to update the UEFI, before switching the processor back. That’s not fun, that’s not interesting. That’s a pain in the backside.Writing for my website is fun, but having to wrestle with my CMS tool to do it – I’d rather use WordPress

Does anybody care about Michelangelo’s paintbrushes? The paintbrush is the tool that made him a creative genius, but nobody remembers the tool, only what he did with it.  I have a friend who is an FX Trader who simply said “I’m losing money when I’m messing around building computers”. He’d rather build something that just works than something that is cheap or does something clever. About 6 years ago, while I was working on a project at university, I was using a laptop running Linux. The owner of this machine told me that every time the kernel received an update, he’d have to recompile the drivers for the Wireless network card. This is an interesting academic exercise, not a practical tool.

Well, I’m still a technologist at heart, and while computers may not get me jumping up and down any more, they still interest me. I’ve been doing some work with the PFSense software defined router platform which is very interesting. I am working on a multi-wan network setup using it which will form the basis of a future article. As such, the future philosophy will be why build a tool when you can just buy one. If you can get something off the shelf, and it’s cost effective, then use it. The interesting bit is designing the systems and seeing them work.

Yes, the computer is now just a tool, and I’m not sad about it. As long as it’s good and it works… I’m too busy.