Speaker Cable Sizing – By the numbers

During a recent reshuffle of all the rooms of the house, I found myself going through the laborious process of moving my office, and all the equipment therein. Part of this meant rewiring my monitor speakers. While I was doing this, I didn’t have enough speaker cable, it was too late to go out and get some, and I was too impatient to order some on the internet and wait for it to arrive. What to do? I went into my store cupboard and grabbed myself a length of 1.5mm2 flexible cable, and hooked the speaker up using it. Having plugged in everything else, I cranked up some AC/DC and enjoyed my new office. Later I got thinking, I know that any decent bit of cable will work for a speaker, but how thick does speaker cable need to be? Looking around, the answer is surprisingly hard to find – instead people want to sell you expensive speaker cables. So here’s the answer: 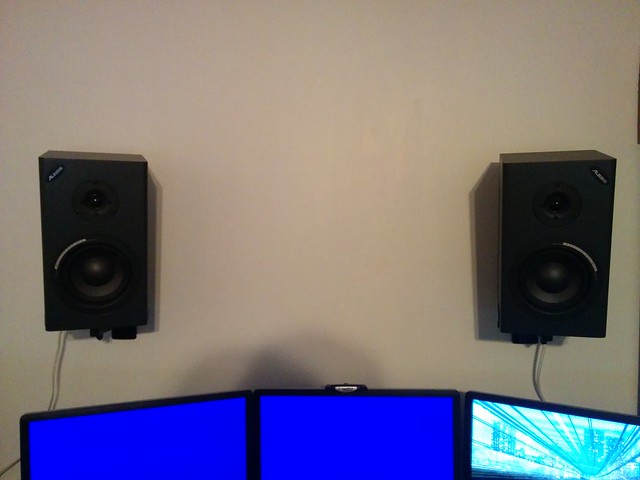 How much current do your speakers draw?

Speakers generally quote two numbers as part of their specification – Power and Impedance, some give power as RMS and Peak. My Alesis Monitor One Mk2’s for instance are 120 watts (200w peak) into 4 ohms. For analysis purposes, audio circuits can be treated as DC systems. We can therefore use the derivations of Voltage = Current * Resistance (Impedance), and Power = Voltage * Current to come up with the current drawn by the speaker.

The formula for this is current = sqrt(power / resistance). If we plug the values for my speakers into this, we get:

By contrast, a cheap pair of phone headphones that pull 2mW through 16Ω require 11mA from the amplifier to run at full power. At the other end of the scale, a large PA speaker rated at 800W RMS and 3200W Peak into 8Ω will pull between 10A and 20A respectively.

Which size speaker cable to use?

The lazy answer to this question is get the thickest cable that your speakers and amplifier can take in its connectors. However this comes with a downside – cost. I’m not talking about buying these “specialist” cables which come with equal measures of snake oil and bullshit – rather the cost of the copper inside. On eBay you can get 50M of 0.4mm2 speaker cable for £12.99 or 10M of 6mm2 speaker cable for £11.99. Assuming that we’re going to select the cable based on the maths, we need to consider two things: Current carrying capacity, and cable resistance. The former is important, as overloading the cables is likely to result in them becoming impromptu smoke machines. The cable resistance matters as getting this wrong will waste power and reduce the maximum volume you can get from the speakers.

The following table shows the current carrying capacity, and resistance per metre (The two way value takes into account the fact that you have two conductors) of various cable sizes:

Research suggests that the cable resistance shouldn’t be more than 5% of the system impedance. This means 400mΩ for an 8 ohm system and 200mΩ for a 4 ohm system. My speakers need no more than 2 metres of cable. Using the above table, I need at least 7A of current handling capacity, and no more than 200mΩ of resistance. For this purpose 1mm2 cable would be appropriate and the 1.5mm2 cable I am actually using providing plenty of overhead. For those large speakers, with 20m of cable between the amp and the speaker would require 2.5mm2 cable to meet the current carrying and resistance requirements. If the distance was increased, then 4mm2 cable would be required to keep the resistance under the 5% threshold.

I found a good guide from an audio company – Pro Co, that covers the technicalities of speaker cables in much more detail.