In March I wrote about the cheapest PC I could build, it came to just under £195. Now it’s the end of May, another two months have passed, new products come onto the market, and older ones are discontinued and retired. Surely though, not much can have changed since March? Using scan.co.uk, who are my goto place for computer supplies, I decided to find out. Last time I specified two machines – the first being the very cheapest thing you could build, the next being something that you could possibly live with. What we’ll do this time is attempt to duplicate these setups, making substitutions where the item has been discontinued, or a better option is available.

For this edition, I have been faced with the question whether to pay a bit more for something significantly better. The answer to this is that unless there is a significant price change, we won’t downgrade from previously. An example of this is halving the size of the SSD to save under £2.

We’re sticking with the CiT 1021 as the case of choice, which is yours for £19.58, same as before. This case is still likely to be the biggest compromise in terms of build quality over a better case and power supply. If you have a cheap case with an included power supply, leave a comment below with your thoughts on it. I know I say the same thing every month, yet I’ve not seen anything to counter my misgivings and you really do get what you pay for. If we’re going for the cheapest PC, that rules Intel out of the running for the CPU. This brings us to the subject of AMD. I personally wouldn’t recommend AMD at the moment, their hardware is so far behind Intel, and the power consumption is worse enough, that I would always aim to use Intel’s chips. Last time we picked an AMD Sempron 2650 on the AM1 socket. Previously you could get it for £21.22, but it has since increased in price to £21.58.

To put the problem with this processor into context, here’s a graph I used in a previous article… When you look at the performance of the Sempron chip in context – it’s hard to justify its selection. 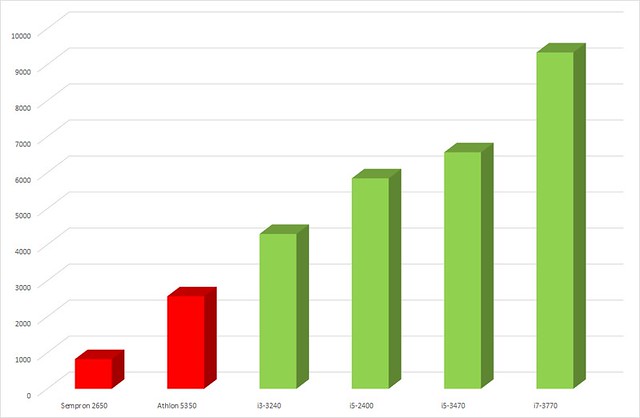 CPU Benchmarks (Higher is better). The red bars are for the processors in the Cheapest PC series.

Onto the motherboard. Scan have the choice of one – The Asus AM1M-A Micro ATX board. The price was £28.76 and has increased to £29.60. This motherboard remains probably the best component of the system.

The 2GB of Corsair DDR3 1333MHz Value Select RAM specified previously at £10.45 has decreased to £9.29. Like the motherboard, the great thing about Corsair RAM is that it just works. 2GB will be adequate for light usage in Linux also. The question now is at this price, how much longer will 2GB sticks of memory be produced, as the profit in this memory must be rapidly evaporating.

Storage is an interesting one. Last time around, the 60GB drives had disappeared, so we had to step up to a 120GB for £30.68. Now the 60GB drive is back at £28.32, but the price of the 120GB has dropped to £29.99. The brand is still a Patriot, I still have reservations about the speed and quality of the drive, but at this price and given what the computer will be used for, it’s not likely to be too much of an issue. To complete our cheapest PC possible, we need a screen, speakers, keyboard and mouse. The cheapest screen in January was this 19.5 inch Acer running at 1600 x 900 using an LED backlit TN panel. It comes with VGA only and has dropped from £61.43 to £58.98.

Sound comes courtesy of this Creative 2.0 set of speakers for the unchanged price of £5.98. My experience of Creative speakers is that they’re solidly built, although at this price, you’re not going to get much sonically.

Finally for the Keyboard and Mouse, The MSI bundle previous used for £4.96 has now disappeared and we’re back to the LMS Data one for £5.99.

Shipping remains £9.58. This means that the computer in May, with the substituted components is now yours for £192.48, down from £194.56 in January. This is a drop of just over 1%. This assumes that we run Linux Mint on it, which will also make better use of what limited processor power is available. The following table highlights the component costs, for which there were no substitutions in May:

With more data available, we can see that the component cost is still slightly higher than back in January, but the overall cost is down because of the reduced delivery charges. The memory is the interesting component – how much lower can it go given that it’s dropped by over 20% in 5 months? 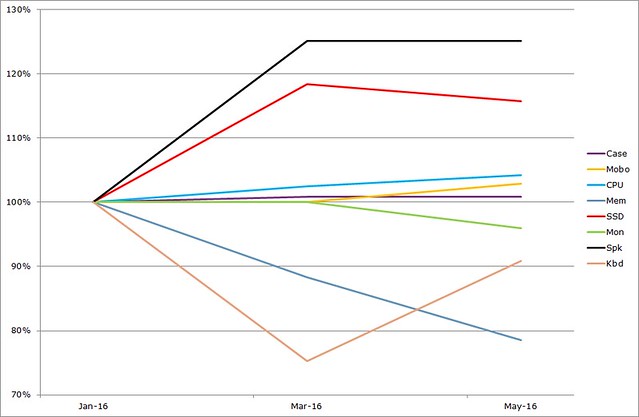 The cost of the various components relative to the initial price in January 2016. 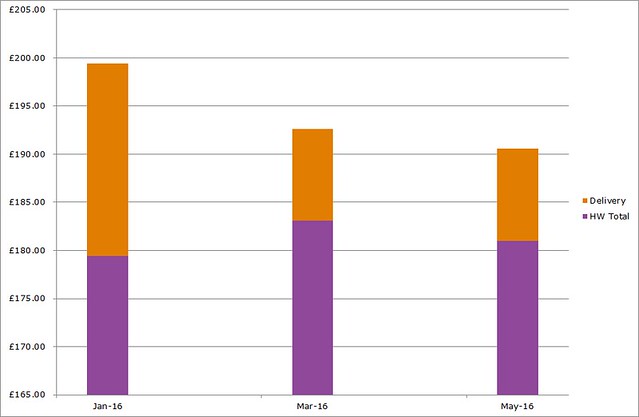 The overall cost formed of components and delivery since January 2016

Now for the best of eBay

In the previous instalments of this series, we’d now build a remotely usable machine, spending around the £280 mark. It’d be better, but still not great. This time though, following the success of the purchase of a computer for my wife via eBay, we’ll look there for the better option.

Stepping it up a bit: